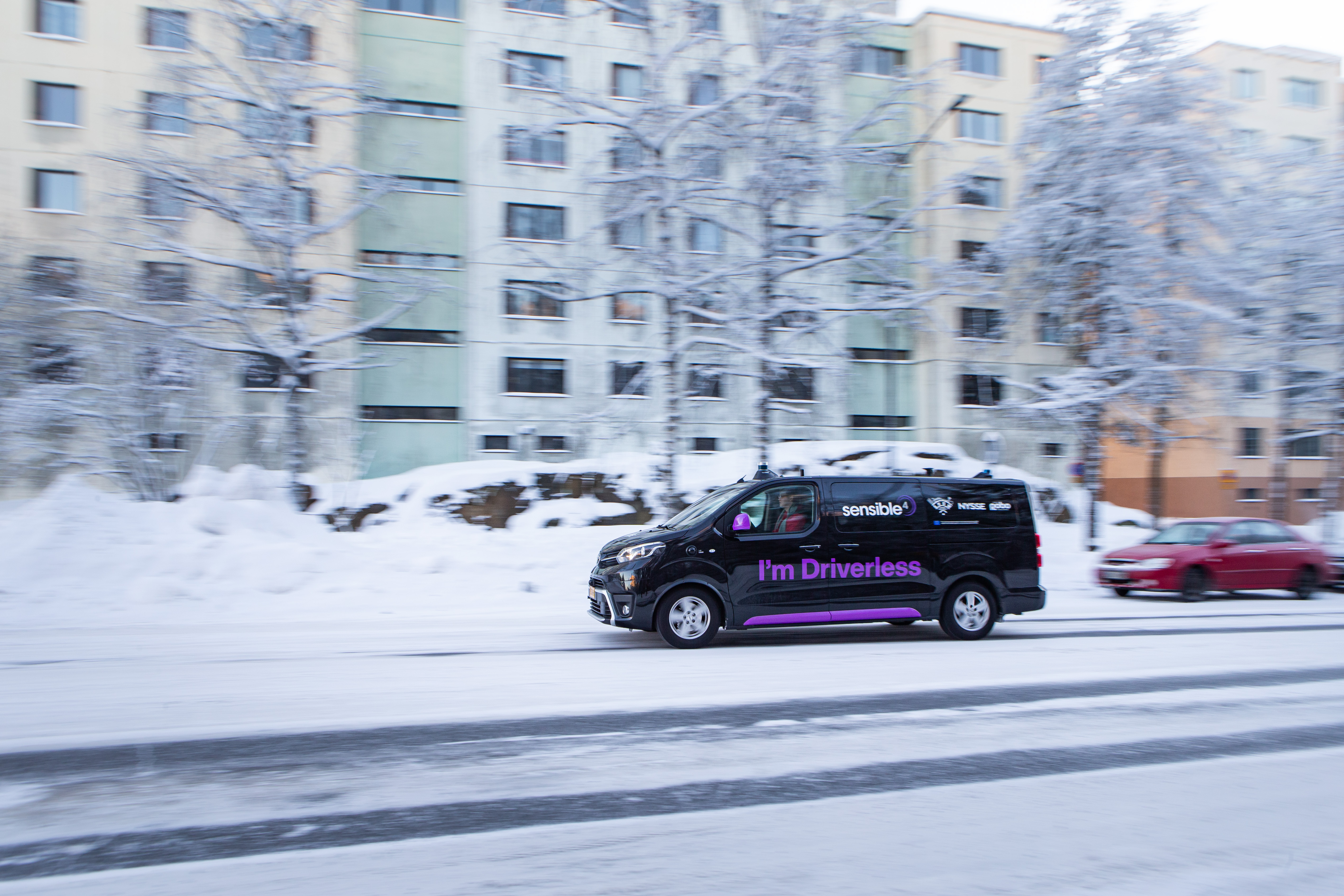 Tram feeder traffic pilot using automatic shuttle buses started in January 2022 in Hervanta, Tampere and it will last for about two months until March 18th. The purpose is to study how robotic cars can complement public transport in the city of Tampere in the future and, in this case, serve the tram feeder traffic. Automatic vehicles could complement larger public transport vehicles especially in such spots, where there are fewer passengers and short distances. The automatic driving pilot is part of the international SHOW project.

Automated traffic test area in Hervanta and the pilots that are excecuted there are supporting the strategic goal of the City of Tampere to be a pioneer in the smart city development.

– Robotic cars are an incredible opportunity for us to build a smooth, sustainable and a smart city. In the future, automatic vehicles can complement public transport in many ways, for example in tram feeder traffic. The service pilot will give us a lot more information about this, and hopefully many passengers will get an exciting car ride experience, says Anna-Kaisa Ikonen, the Mayor of Tampere.

– In the future, we can utilise artificial intelligence and data for the benefit of the citizens in ways we may not have yet invented. As a result of diverse know-how and unconventional thinking, solutions improving citizens’ daily lives will be created, generating new business and knowledge. It’s great, not only locally, but also nationally and internationally, Ikonen continues.

In December 2021, the City of Tampere’s public transport test laboratory, NysseLab, hosted a test day where seven people got to try traveling on a robotic bus. The testers were selected in a sign-up order, however, in such way that both the car drivers and the passengers who are mixing public transport with their cars were included in the test team.

Test passengers who participated the NysseLab day, were positively surprised by the smooth overall ride experience, though there was also room for some improvement. Their expectations beforehand had been quite similar: driving would be slow, cautious, and jerky. Also braking was expected to be touchier than with a human driver. However, all seven tester passengers were positively surprised by the driving experience. Here’s how they commented:

“I expected the ride to be slow. However, it was like a normal ride in a regular minivan. I’m wondering though, how the vehicle would work in the dark and in situations where pedestrians are not walking on the sidewalk.”

“In advance I thought driving would be slow. However, the car performed surprisingly well on the route and spotted people walking on the pedestrian crossing. Personally, I longed for more speed.”

“I thought self-driving was slow, calm, thoughtful – could driving be even jerky? But the experience was all positive. There were some sudden, touchy brakes on the way, but that is probably how it is at this point of development.”

“I assumed the driving was careful and punctual. I came with an open mind and the driving turned out to be interesting as well as quite safe. The car survived from slipperiness well and although it was a bit tense in advance, the driving was not scary.”

“You could not notice it was an autopilot. I was surprised at how well the car pays attention to other vehicles and travelers. If something was still to be developed, accessibility hadn’t been taken into account. The car was cramped, and the back seat was a little hard to get to.”

Jussi Suomela, Business Director at Sensible 4, says that the most important thing about driving is safety:

– In the pilot phase, when features are tested and developed, safety comes first in everything. For this reason, the brakes may be a little too sharp from time to time. Laser scanning technology works well both in daylight and in the dark. It constantly detects other people, also walkers outside the pedestrian crossing.

Service pilot in a nutshell

• The pilot continues until March 18, 2022
• Robot vehicle drivers regularly on weekdays from 8.30 am to 3.30 pm, the interval is about 10 minutes
• Passengers are transported in two Toyota Proace vehicles, which are automated by the Finnish company Sensible 4
• The service is free of charge
• The route is about 3.5 kilometers long
• The driving speed is 30 km / h
• The vehicle has a safety operator
• Route: Insinöörinkatu-Teekkarinkatu-Ahvenisjärventie-Opiskelijankatu

The stops in Hervanta are:

The pilot is implemented as part of the SHOW project, which receives funding from the EU’s Research and Innovation programme Horizon 2020. Sitowise coordinates the SHOW project in Finland.